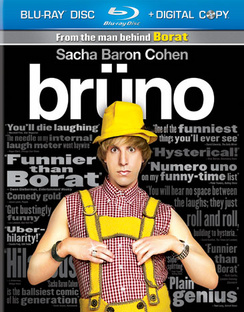 SKU 025195052597
$6.00
In stock
1
Product Details
Year: 2009
Rated: R, pervasive strong and crude sexual content, graphic nudity and language
Genre: Comedy
Runtime:
Studio: Universal
Directed by: Dan Mazer
Starring: Sacha Baron Cohen, Ron Paul, Richard Bey, Trishelle Cannatella, Alice Evans, Sandra Seeling, LaToya Jackson
Description: Golden Globe-winner Sacha Baron Cohen (creator/star of Borat and Da Ali G Show) is at it again as he brings his most over-the-top character to life in the comedy that has started more conversations, generated more controversy and dared to go further than ever before! As Brüno travels the world in search of fame, no one – whether they are celebrities, politicians or even terrorists – will be spared from his signature sense of style and his wickedly off-kilter manner! And, yes, they are all real situations!
Save this product for later
talk2slackers@slackers.com
slackers.com
Facebook