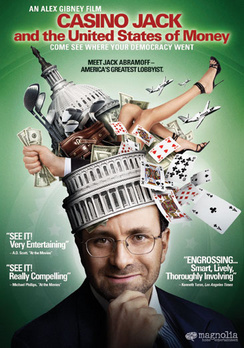 Casino Jack and the United States of Mon - DVD - used

SKU 876964003131
$6.00
Out of stock
1
Product Details
Year: 2010
Rated: R, some language
Genre: Documentary
Runtime: 118
Studio: Magnolia
Directed by: Alex Gibney
Starring:
Description: This portrait of Washington super lobbyist Jack Abramoff--from his early years as a gung-ho member of the GOP political machine to his final reckoning as a disgraced, imprisoned pariah-- confirms the adage that truth is indeed stranger than fiction. A tale of international intrigue with Indian casinos, Russian spies, Chinese sweatshops, and a mob-style killing in Miami, this is the story of the way money corrupts our political process. Oscar-winning filmmaker Alex Gibney once again wields the tools of his trade with the skill of a master. Following the ongoing indictments of federal officials and exposing favor trading in our nation's capital, Gibney illuminates the way our politicians' desperate ly need to get elected--and the millions of dollars it costs--may be undermining the basic principles of American democracy. Infuriating, yet undeniably fun to watch, CASINO JACK is a saga of greed and corruption with a cynical villain audiences will love to hate.
Save this product for later
talk2slackers@slackers.com
slackers.com
Facebook