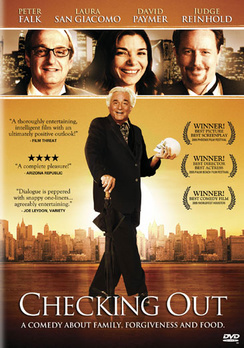 SKU 783722737729
$4.00
Out of stock
1
Product Details
Year: 2006
Rated: PG-13, language, some sexual material and thematic elements
Genre: Comedy, Drama
Runtime: 95
Studio: Allumination FilmWorks
Directed by:
Starring:
Description: A snappy, smart and heart-warming comedy for the 21st century unfolds against modern day Manhattan. Peter Falk stars as Morris Applebaum, a feisty retired thespian with deep roots in Broadway theater. On the eve of his 90th birthday, Morris invites his three middle-aged children back to his stylish apartment for the party of a lifetime. As a postscript, Morris informs them bluntly that after the party he plans to bring the curtain down on himself and make his "final exit". Flying in from all parts of the country, his children converge on their father's home to try and convince him that life is still worth living.
Save this product for later
talk2slackers@slackers.com
slackers.com
Facebook