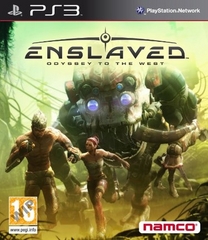 Enslaved centers on the complex relationship between the two main characters and challenges players to employ a mix of combat, strategy and environment traversal. With influences and contributions from top music and film industry talent, Enslaved combines beautifully rendered graphics and captivating music with seamless animation and engrossing gameplay.    More than 150 years in the future, the world has transformed into an unrecognizable state where all that remains are a dwindling human population and merciless robots left over from wars long past. In Enslaved, players take on the role of Monkey, a strong and brutish loner, and his AI partner Trip, a technologically savvy but sheltered young woman from a peaceful community. Both become captured by a mysterious slave ship, which are rumored to harvest people and take them out west never to return. As they each attempt to escape, Trip realizes quickly that Monkey, with his raw strength and power, is the only hope she has of making the perilous journey back home. She hacks into a slave headband to enslave Monkey and link them together if she dies, he dies. Her journey has now become his.    Players must make sure both Monkey and Trip work together as they skillfully navigate through the world and survive against the dangerous enemy obstacles that lie in wait. Monkey will deftly wield his trusty staff weapon to attack and defend against enemies, using a combination of melee attacks, blocks and counters. He will also be able to perform spectacular takedown moves, allowing him to rip an enemy apart piece by piece, take its weapon for his own use or destroy it in one final blow.