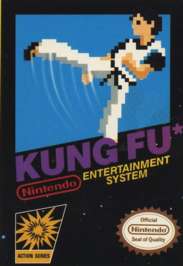 In a city where the police are corrupt, gangs rule the streets, and a mysterious microchip is brainwashing the citizens, you’re the last ray of hope as the Kung Fu master in KUNG FU II. Your name is Johnny Thomas, and you’ve been studying your craft for many years. All that training is about to pay off, because you’ve got to stage a one-man charge against the evil powers that are producing these microchips and causing anarchy in the streets. You’ll have to duke it out in a number of different environments, like the slums, the subway, and a smuggler’s ship as you search for answers and justice. It will take fast reflexes and a sharp wit to survive in these situations, so you’d better be ready if you’re going to solve the mysteries of KUNG FU II.