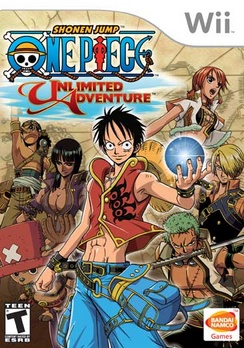 In One Piece: Unlimited Adventure, the motley Straw Hat Pirates find themselves stranded in a mysterious land after a massive island rises to the ocean surface from underneath their pirate ship. Players must assume the role of their favorite One Piece persona and explore this newly formed terrain to uncover the secrets and powers that lie within this isle. With the innovative Wii remote and Nunchuck controller, players will pull, turn and swing to battle nefarious villains using each character’s own unique set of moves including Luffy’s “Gum Gum Storm” and Nami’s “Cyclone Tempo”. Now with more One Piece playable characters than ever, gamers can journey through the exclusive new storyline in Adventure Mode using one of eight Straw Hat pirates or test their skills in Survival Mode and Vs. Mode to unlock more than 40 additional playable swashbucklers. Find a bountiful booty of items, unlock special moves and costumes all in the name of acquiring the ultimate treasure.