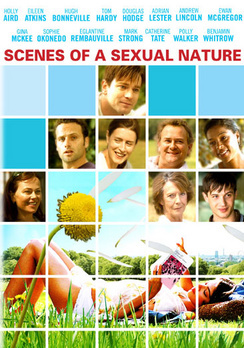 SKU 821575557450
$4.00
Out of stock
1
Product Details
Year: 2008
Rated: R, language and sexual content
Genre: Comedy, Romance
Runtime: 92
Studio: ThinkFilm
Directed by: Ed Blum
Starring: Ewan McGregor, Eileen Atkins, Hugh Bonneville, Tom Hardy, Andrew Lincoln, Sophie Okonedo, Holly Aird, Gina McKee, Douglas Hodge, Adrian Lester
Description: Sex and love. Some seek it, some need it, some spurn it and some pay for it, but we're all involved in it. Set on one afternoon on Hampstead Heath, London, the film investigates the minutiae of seven couples. The film is a comedic and erotically charged look at what makes us tick, and it seems that what makes us tick is complex, dark and ludicrously funny.
Save this product for later
talk2slackers@slackers.com
slackers.com
Facebook